Dorothy Hood: Book One in the Series

Together on one boat.

Tom, a man on the verge of a nervous breakdown.

Fred is often confused and losing his memory.

These are the crew of the Scarborough fishing trawler, Dorothy Hood, as she prepares to set sail on her final fishing trip of 1973.

Owner and Skipper, Tom, is carrying the weight of the world on his shoulders. After a year of poor catches and expensive engine repair bills he is deeply in debt. So much so, that he has had to remortgage his house.

Recently separated from his wife, Debbie, Skipper Tom`s sadness was magnified tenfold by the death of his beloved mother, Dorothy, four months previously. His main concern now is for his father, and fellow crewman, Fred.

Fred`s memory lapses and episodes of confusion are now growing with increased regularity; just like the breakdowns of the Dorothy Hood`s ageing diesel engine.

Dorothy Hood isn`t just a story about four men on a sixty foot trawler in the depths of a North Sea winter, battling against all the elements nature can throw at them.

It’s also a story about true friendship, jealousy, revenge and forgiveness. But more than that, it`s a story about the unbreakable bond between a father and his son.

GET YOUR FREE BOOK NOW. 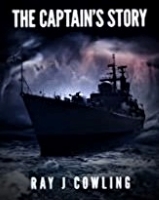 This book is not for sale anywhere.

It is my exclusive gift to you for signing up today!